CLOSING IN THE NEXT FEW WEEKS PLEASE NOTE ALL SALES ARE FINAL !!!! AUTOMATIC 70% OFF AND MORE AT CHECKOUT ON ALMOST EVERYTHING!! THANK YOU FOR YOUR SUPPORT! 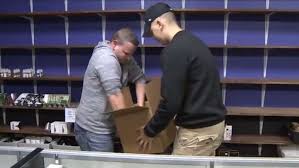 Amanda Georgoulias and her husband have been running Vapeology in West Bridgewater for four years but Wednesday, a health inspector walked into their shop and told them to get rid of their inventory.

“Two days ago I had a vape shop that was doing really well,” she said. “Two locations, and now, I have two stores that I cannot open the doors to sell.”

Baker announced the ban Tuesday, declaring a public health emergency after multiple instances nationwide uptick of severe lung disease associated with the use of e-cigarettes and marijuana vaping products.

The state Department of Public Health unanimously approved the ban 11-0, and state police will be allowed to seize any vaping products in stores until January 25, 2020 unless further action is taken.

Boston doctors have also said they have seen an increase in lung issues among teenagers.

“Maybe if somebody did this back when cigarettes started to go on stores, we could have saved a lot of lives,” he said.

Those who say they vape are now weighing what comes next.

“I have quit cold turkey before,” Mikey Dugre said outside Vapeology. “You know, I picked it back up but, you know, it is a little incentive to quit again.”

For now, owners have nothing left to do but close up shop.

“It’s not just me,” the Vapeology owner said. “I have staff. They have families and now they are out of a job.”

As it stands, the ban will last four months but store owners said they will not be able to afford their rent with no product to sell.

Many are expected to go out of business.